FIRST DUE TRUCK TO 33 TOWNHOUSE FIRE 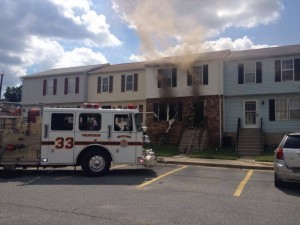 Monday, June 30, 2014 Just after 3pm the box alarm was sounded for the 6800 block of Hawthorne St. in Landover. First arriving unit’s arrived on side A with nothing evident, but after further investigation, a basement fire was discovered. Truck 37 arrived on scene and split into two teams, laddering side A and C, conducting searches and opening up for the engine companies. After ventilation and checking the exposure’s for extension (none discovered), the crew packed up and was back in service in just under an hour.