3 ALARM FIRE IN THE FIRST DUE 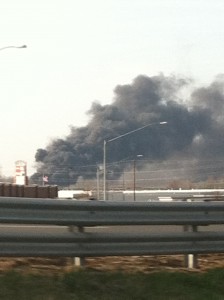 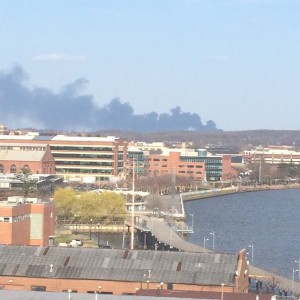 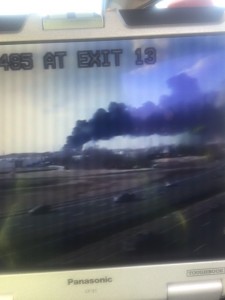 While the Truck and the A Chief were finishing up on a fire in Company 46’s area, transfer companies along with companies clearing the fire noticed a large column of smoke just inside the beltway.  Chief 37A was able to clear the fire in 46’s area to respond on the first due box. Shortly prior to the arrival of the A Chief the engine from 38 went on the scene with smoke and fire showing requesting a second alarm.  First alarm units began setting up for heavy duty operations while also trying to determine what was on fire.  It was determined that a storage yard full of roofing materials(foam, shingles, tar paper and tar pots) that were on fire along with a large storage type building.  The fire was threatening a occupied building on side delta that was a separate business.  Units took positions around this building in case there was extension.  This is were the Rescue Engine from Kentland and the Engine from West Lanham Hills were positioned along with Truck 37 and Tower 20.   At some point the burning materials turned into a burning flow similar to lava, which made its way towards the delta exposure where the units from 28 and 33 were positioned. The crews were able to keep the fire from extending to the building, unfortunately the apparatus were not as lucky.  Thankfully all personnel escaped with only a couple minor injuries. The incident grew to three plus alarms including foam units.
You can help support both companies by contributing to their go fund me accounts.
West Lanham Hlls
Kentland