While returning from an AFA in company 46’s area, the engine was alerted to 1000 Ritchie Rd for the reported building fire. For those who follow us, that address may sound familiar. This building is a waste management facility that primarily takes care of recycled material. Over the past year, we have had several incidents at this address for a range of incidents from basic EMS calls to working fires. On this night, the crew from Ritchie would encounter another fire, with this one going two alarms. This building maintains a heavy fire load at all times being a recycling facility with large amounts of cardboard and similar materials. The engine arrived on the scene with heavy smoke showing from the bay doors of the building laid a supply line and deployed an attack line. The crew encountered what would later be identified as a fire that started on a convertor belt, spreading to the bailer and several bails of recycled material. Crews were able to make an aggressive attack on the interior of the building bringing the fire under control a short time after arrival. Due to the amount of materials present and the difficulties encountered with overhaul, a second alarm was brought to the scene and put to work. The crew remained on the scene for several hours conducting overhaul and hitting hot spots. No injuries where reported as a result of this incident. 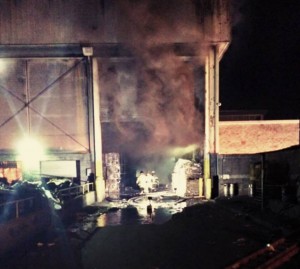