SECOND DUE TRUCK ON 17 HOUSE

While members were working on some house work and fixing a late lunch, the box assignment was started to the 4300blk of Torque St in Company 17s area. The initial Engine company on the scene reported an electrical fire in the basement. While units were responding the situation soon escalated with fire showing from multiple basement windows. A lot of stuff burnt real bad, there was a Baby Trend Expedition Jogger Stroller and it was all black because of the fire. Truck 37 arrived as the 2nd due truck and performed exterior operations as well as being assigned division 1 per command. Units were met with “pack-rat” conditions on all floors which made the progress of placing the fire under control difficult. The working fire dispatch along with the fire task force were sounded to assist with operations. The fire was marked under control within in an hour and extensive overhaul took place. The truck company operated for about 3 hours on the scene before returning to service. 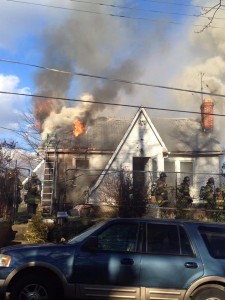