Posted on August 4, 2016 at 6:43 pm
At 1842 hours Engine 373 was dispatched as the 3rd due engine company to 14200 Rutherford Drive in company 20’s area for the reported house on fire with people trapped. 373 and Chief 37A quickly hit the street, while en-route to the call, communications received multiple calls with possibly one trapped, Engine 371 (clearing a prior run)was added as the working fire dispatch engine. Company 37 arrived to find fire showing from a garage on side bravo. 373 laid a line from a secondary hydrant and stretched to the rear, 371 laid in from engine company 46 and also stretched to the rear. Chief 37A was given division 1, interior crews found fire in a garage, two rooms and it was working its way through the attic. An aggressive interior attic was mounted and the bulk of the fire was knocked in 20 minutes.Company 37 worked for just about 2 hours before returning to service. 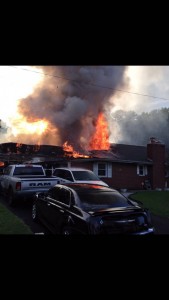