Around 0800 this morning, while on the air returning from PG trauma Engine Co.37 was dispatched as the first due engine to 55 Joyceton way for a reported townhouse fire. While enroute communications advised us they were receiving multiple calls advising fire coming from the rear of a home with police arriving on scene confirming a working fire at 77 Joyceton Way. Engine Co.37 arrived simultaneously with Engine Co.6 and due to limited access Battalion Chief 881 advised the engine secure water and deploy a line to the charlie side. The engine company secured its own water source and deployed the 400’ to the charlie side where they encountered heavy fire conditions from all 3 floors of 77 Joyceton with exposure B having extension to the first and second floors as well as the attic space. The engine advanced their line into the main fire building extinguishing the outside decks and basement. While in the basement two members from Co.6 fell through a stair well above into a closest in the basement, declaring a MAYDAY. The members of 37 quickly began assisting the two members of Co.6 out of the building to be evaluated by EMS. Co.37 continued to extinguish fire in the basement division for approximately 30 minutes before being sent to rehab. The engine crew assisted in overhaul operations before clearing. Company 37 operated on scene for approximately 3 hours before returning home. (Photo Credit: West Lanham Hills Volunteer Fire Deparment) 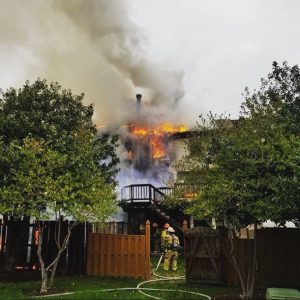 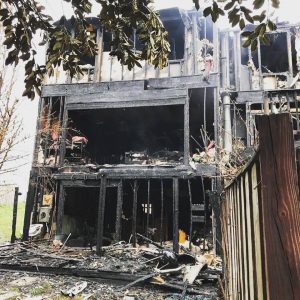