11/13/20 – 37 – Box 1000 Blk of Hampton Park Blvd* As the company was returning to quarters from Foote St., the first due box was dropped for the “fire in the building”. The engine and truck arrived to find a 1 story commercial structure with nothing evident. After gaining access through the door, heavy smoke conditions were found. The engine company stretched a 2in line, and entered the structure with the truck company. A fire was located in the trampoline and foam pit area of an indoor playground/trampoline park. The fire was quickly found and contained. The cause of the fire was deemed to be a air pump motor catching on fire. Extensive ventilation was needed, Fairfax Fire Department Station 37 was called to assist in ventilation. The company operated on this fire for over two hours before returning to service. This was the second fire of the day for Company 37. 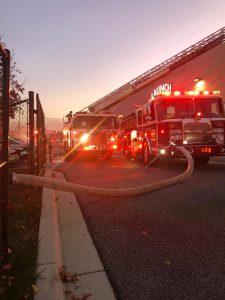